Two brothers, Harold and Roland Booma were star athletes at Dartmouth College and the hockey rookie of the year award is called the Booma. These brothers are my wife, Stephanie’s, great-great uncles. Their half sister Emily Catherine was Stephanie’s great- grandmother. Emily’s uncle, Frank Booma, was a New Hampshire soldier killed in World War I and the American Legion Post in Portsmouth is named for him. 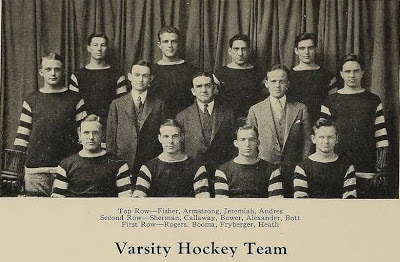 Harold E. Booma for whom the award is named was born on the 4th of July in 1908. His parents, Scott Booma and Annie May Stevens, were married in 1906 in Milton Mills, NH and were living in Swampscott, MA 2 years after his birth so he was probably born there. Scott was from Lancaster, NH and Anna from Milton Mills, NH. There were many Stevens from this area including Tufts kin and the Booma records lead back to Connecticut and Canada. The opportunity for research of both these lines is apparent. A copy of the book French-Canadian Emigrants to New England. An account of the Booma family would probably have the full story but I have not found a copy except in the Baker Berry library at Dartmouth. Harold would have attended Swampscott schools and then went to Dartmouth where he graduated in 1930. In 1929 he was in the Delta Nu fraternity (which was overseen by my great-uncle Nathaniel Burleigh). The yearbook “Aegis” lists Harold on the football team as a left end and a right defenseman on the hockey team. He captained the hockey team for the 1929-1930 season. He certainly appears to have been a standout athlete, playing baseball as well. His name must appear in local newspapers and sports sections of the day. He was awarded the Kenneth Archibald Prize for outstanding athletic achievement and scholarship. He is mentioned in one book describing the Yale game which was always a rival at Dartmouth (Football: The Ivy League Origins of an American Obsession by Mark F. Bernstein) (http://books.google.com/books?id=n3i4KOu7MiEC&dq=harold+Booma). Many other records are available at the Dartmouth athletics website http://www.dartmouthsports.com/ 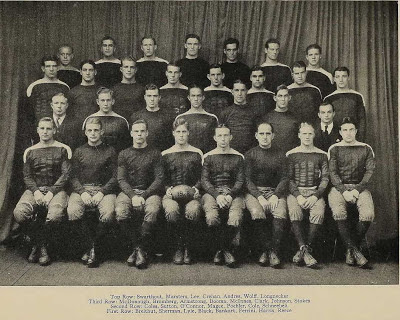 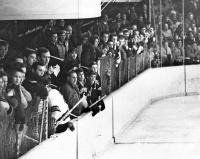 The 1929-1930 season was the first in Davis rink. Before this they played outdoors at Ocom pond. 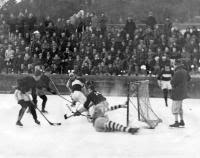 There is even some film footage of the Dartmouth-Yale game in 1929
http://www.efootage.com/stock-footage/54679/Yale_Vs_Dartmouth_Hockey_Game_-_1929/ 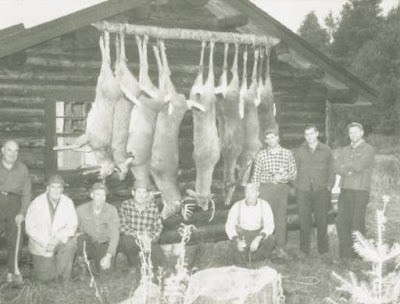 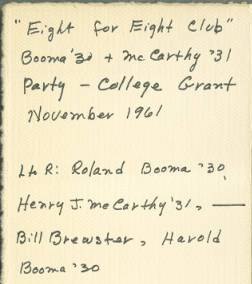 The Boomas also enjoyed outdoors hunting sports. There is a picture in the Dartmouth library collection of a group called the “Bait and Bullet” club with another called the “Eight for Eight”. The Eight for Eight club is pictured at the Merrill Brook cabin in Dartmouth Grant lands of northern NH. They apparently had a good year: at least two nice bucks are pictured and eight total deer for eight hunters. The letter accompanying the picture mentions that Harold is the first on left and his brother Roland is fifth from left. It also says the fourth from left is the president of the United Shoe Machinery Company where Harold worked. (United Shoe was a very large shoe equipment company in Beverly MA.) He is listed in census and directories available at ancestry.com as a manager and one trade magazine (Steel vol. 159 1966) states he was a vice president. He is also mentioned in the Who's Who in America. 38th edition, 1974-1975 and Who's Who in Finance and Industry. 18th edition, 1974-1975 presumably for his accomplishments with the company.  Harold  and his wife Dorothy settled in Marblehead by 1940 and raised 2 sons, Scott and Richard. Richard also played hockey at Dartmouth.

Roland Clayton Booma was born June 11, 1906 and died May 8, 1977. His wife was Dorothy Margaret MacLean. They had a son, Roland C. Booma, Jr., and lived in Salem and Lynn MA. He started Booma Oil Company which exists today. Roland probably attended local schools before going to Dartmouth where he graduated in 1930. In addition to hockey(?), he also played football and was a member of Kappa Kappa Kappa fraternity. 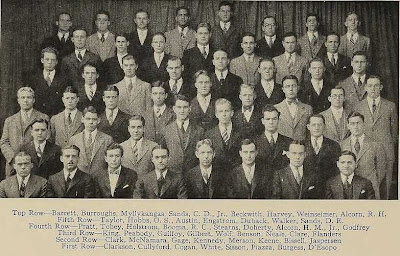 Stephanie and I will add the Frank Booma story when we have completed the research. Many New Hampshire baseball players will be familiar with the name if they follow Legion baseball because the Portsmouth post is named for him.
If anyone has further information on the other families from these Booma families, please post it in the comments or send me an e-mail. We do have information on some but the story is confusing because of name changes and secondary marriages. Also, if anyone has sports memorabilia or news copy of the Dartmouth teams of 1928-1930, please let us know in the comments section or by e-mail. As of this writing, we have accumulated data that result in this story about Emily Catherine. If there are errors and anyone has verifiable information, please let us know. This is one of those genealogical mysteries that we feel is very close to being solved.

Emily Catherine Booma was born Sept. 1, 1902 in Portsmouth, NH and died Jan. 24, 1995. She was the daughter of Scott Booma and Mary (Monahan) (his first wife). Emily grew up in the George W. Dame household when Scott Booma remarried and went to Massachusetts. When she married William Sears (or Cyr) she had adopted the name Dame and her mother had remarried Percy Freeman after George Dame’s death. She later adopted the name Cyr even though it may have been Sears. She had three daughters Margaret, Catherine and Lyla. Margaret died very young, Catherine died in a house fire with her daughter, and Lyla is my wife Stephanie Catherine Toland-Tufts’ grandmother on her mother’s side. Many of her descendents are living today but will not be published here. They include members of the Kidd, Grogan, Harris, Jordan, and Toland families. 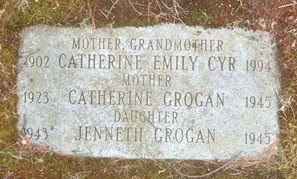 Dartmouth library collections available on the internet were used in this story: http://libarchive.dartmouth.edu/cdm/search/searchterm/Booma

Yearbook pictures used above are available at ancestry.com