Welcome to the Tufts Kinsmen Association home page. We are currently planning a web site but for now this page will serve for book order information and news.
(President's message)

The Tufts Kinsmen Association will be holding its 2018 Annual Meeting at Tufts University in Medford, MA—details to follow. We would appreciate hearing from you if you may be able to attend, so we can plan for the meeting. You can reach us at tuftskinsmenbook@comcast.net 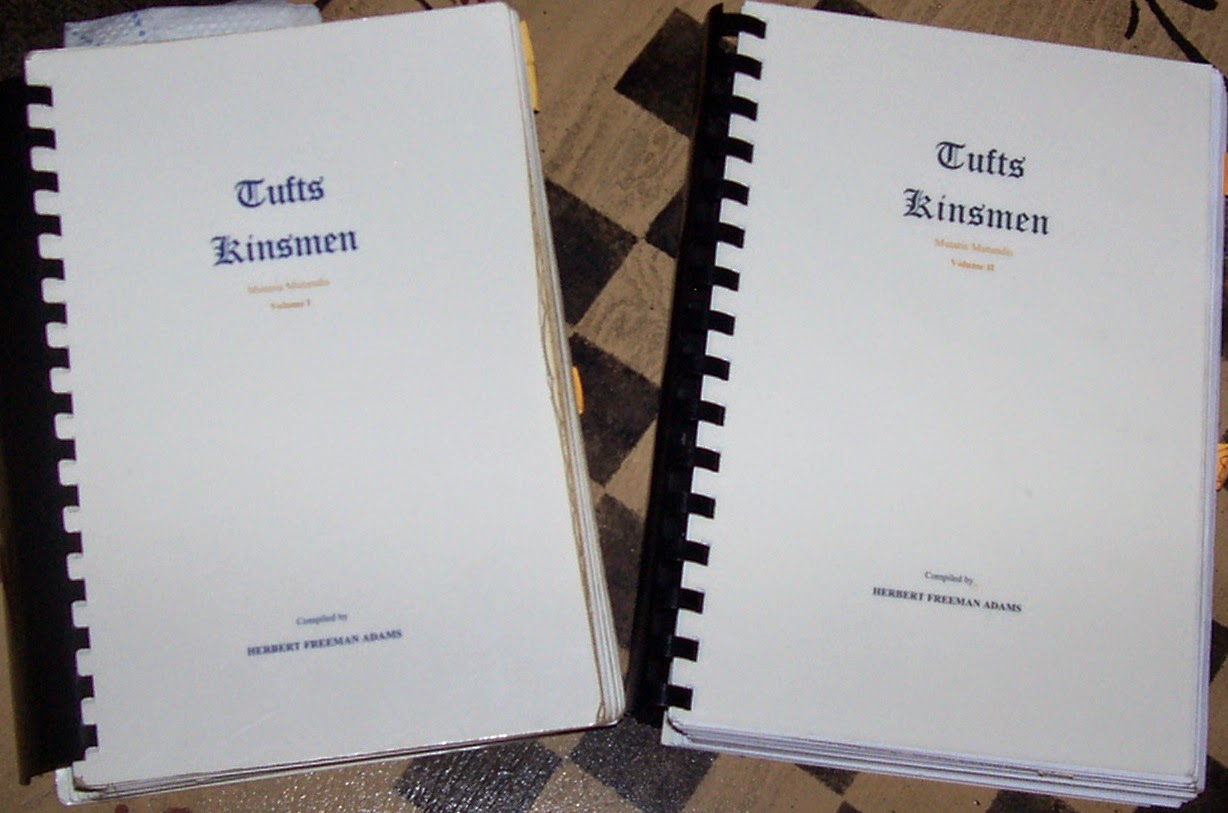 
I will have to post this story in several chapters.

Check each post often as I will also edit them when new information is added and note it at the top of the post.

It is lengthy because I have tried to list details for families into the tenth generation of Tufts descended from Peter Tufts of Charlestown Massachusetts. I have also and will continue to post stories about descendents as I find them. Details of generations eleven, twelve or even thirteen may be included later or by the persons themselves in the comments section as they could be living today and I want to respect their privacy.
Much of the information here comes from Tufts Kinsmen by Herbert Adams and The Tufts Kinsmen Association and is referenced here as allowed by copyright with full credit given to the hard work of Mr. Adams and others. I recommend any serious researcher of Tufts and other families’ related buy this book or find it in a library near you. The book may be purchased by sending an e-mail to tuftskinsmenbook@comcast.net

I also want to help people make cousin connections so please message me privately if you need to find a living descendent. Please feel free to just post your name and where your family lives today and ancestors. Readers can use the Tufts Family Genealogy Facebook page to make connections as well.

Tufts families may have come to Nova Scotia from America as early as 1749. The first of those to came from America was Gershom Tufts, one of the first settlers of Dartmouth, Nova Scotia. Gershom obtained a British Crown land Grant of close to one thousand acres.  Gershom left many descendents which I will detail below, including some lost in the horrible Halifax explosion of 1917.

The next migrant was Reverend Joshua Tufts in 1761. He was born in 1716 in Newbury, Massachusetts, the son of Reverend John Tufts. He preached in New Brunswick and Nova Scotia and many of his descendents lived in those provinces as well.
There were others which will be detailed as well, but these are the main families who left descendents. This does not include the soldiers who bravely assaulted Louisburg in 1745. Their story is told here: http://tuftsgenealogy.blogspot.com/2012/11/tufts-military-history-part-one-before.html That story tells about Peter Tufts (1713-1745) who died of disease at the siege of Louisburg and may have been buried there.
There were also Tufts immigrants to Nova Scotia from Ireland, including Moses Tufts and Hugh Kearns Tufts.

Gershom Tufts
Gershom Tufts was born July 2, 1728 in Medford.(previously believed to be January 2, and listed in Medford records as June 23, 1728) You can believe whichever date you wish. I am going on the newest record available on ancestry.com which appears to be straight from the family bible. 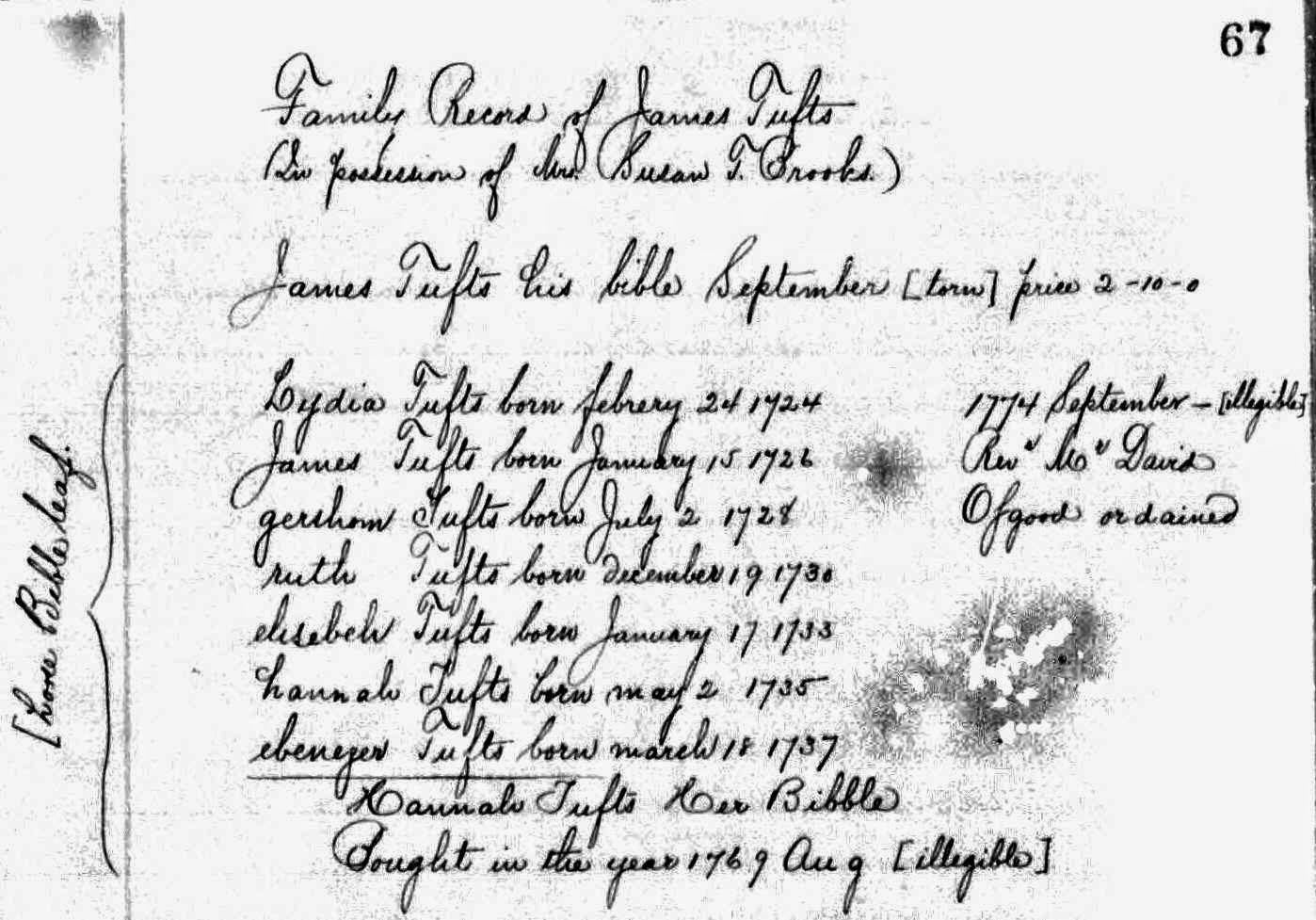 In 1749 the British decided to settle Halifax Nova Scotia and settlers were brought there and given land. I thought it would be more likely he went there in 1750 as the 1749 settlers all sailed from England but perhaps some came from Massachusetts as well.. Various history references and researchers state however that it was 1749. The 1750 settlers came on the Alderney and had 353 immigrants, which established Dartmouth. (History of the townships of Dartmouth, Preston, and Lawrencetown, County of Halifax, Nova Scotia Lawson, 1893.)
Gershom’s first 5 children were recorded in Charlestown and Medford until 1756. There are also miscellaneous tax records up to 1761. Those would need to be investigated closer. The last one is an abatement paid to him so it could have been after he had moved to Dartmouth. (Later records there would be for his second cousin Gershom born in 1767.) It is entirely possible he went before his wife and children as they were young and he had to build a home for them. The book Nova Scotia Immigrants to 1867 by Leonard H Smith states he came with Cornwallis in 1749 and his wife came in 1760. This is perhaps the reference that Herbert Adams used for Kinsmen.

(Gershom)obtained a Crown land grant commencing along the shore of the Narrows near the old windmill that still bears his name, Tufts Cove. It extended for a thousand acres to the eastward and extended straight across the Dartmouth Lakes. On an 1815 plan there is an area marked Tufts house, the location of which could have been on the level ground overlooking Lake Micmac about 350 yards distant from the later Town limits on Crichton Avenue.
Tufts Kinsmen 2010
http://en.wikipedia.org/wiki/Tufts_Cove,_Nova_Scotia
Wikipedia link to Tufts Cove
http://www.cbc.ca/halifaxexplosion/he9_textonly/index.html
Halifax explosion site
http://www.rootsweb.ancestry.com/~canns/advertisement.html
Advertisement for settlers in Halifax

This was a pioneer settlement in 1750. Louisburg was still being conquered and traded back to the French, LeLatour’s war was the current French and Indian conflict, and the northeastern weather and terrain were their own obstacles to survival. But they survived and built several homesteads. Gershom is described as a ships carpenter and farmer. He married Mary (Baldwin) Waugh, widow of Richard Waugh, and daughter of James and Mary (Stower) Baldwin. Kinsmen states they were married in Aylesford, Nova Scotia July, 2 1750 but I have not found that record. Some online family trees say he was married to Mary at St. Paul's Church in Halifax and there is a record in St Paul’s’ Halifax records available on line at http://dwaynemeisner.com/index.php That record state her names as Mary Baugh. Mary died 20 Dec, 1806 in Dartmouth, NS.
The families he left appear to have had a probate conflict of epic proportions of which there must be numerous records of court proceedings. This quote from Tufts Kinsmen details it briefly:
Undoubtedly over the years certain portions of the forest in Gershom’s grant were gradually cleared and cultivated by members of his family who after a time occupied their own homes and were able to fend for themselves. His children apparently assumed that they were the possessors of their respective holdings but by the year 1791 they found such was not the case. Apparently their father had no desire to reward them for their labors on the lands they had possessed, and, suffering from some sort of a rift in family relations, in 1791 announced that he was going to dispose of his property, including the parts on which his children had settled, and move back to Massachusetts, selling the thousand acres to strangers, thereby disfranchising his children of their homesteads. A case in court developed for the members of his family to reclaim their lost real estate. All this is inferred from a 1791 petition to Gov. Sir John Parr that declared three of his sons had made considerable improvement to the lands in Dartmouth assigned by warrant to their father, but the Government could do nothing about the matter. Records have not been found as to how the recovery was accomplished or whether Mary accompanied her husband back to Massachusetts but she evidently died in Dartmouth and is buried in Tufts Cove Cemetery. Her gravestone in evidence when this compiler ﬁrst visited the cemetery in the 1960’s has been missing since.
The Tufts cove cemetery is currently being restored. Many pictures can be found at their facebook page. “Tufts Cove Cemetery”That page has some excellent maps and pictures and family trees of the Tufts and Wright families.

I welcome any ideas or true stories about the family “rift” that caused Gershom to return to Massachusetts and sell the land out from under his children. I have found no record that his wife returned to Massachusetts. There may be records undiscovered in Nova Scotia that give more insight into this story. Perhaps they were divorced or she is recorded in a census document in Dartmouth. There is always more to the story.

More research about the land conflict was undertaken over the years. Sandi Bellefeuille, the able and exhaustive assistant of Kinsmen author Herb Adams is a direct descendent of Gershom and with other cousins discovered that the land grant was never approved. The records exist of only his application. It appears over the years of land sales, the government decided to honor the original grant as if it were approved. It appears that Gershom did sell the land out from under his sons but nobody ever tried to remove them. Gershom sold it to a Thomas Cochrane who died with no will, as did his wife. Their estate was so disrupted that the Tufts land was never dealt with. So the families lived in Dartmouth and bought and sold land as it were their own and much of it eventually was held by the Gay family, many of whom were descendents of Tufts daughters. This was a complicated issue and I have only presented it in brief. There is probably more that can be discovered about the land sales and deeds.
This website has some great church records from Nova Scotia. It requires registration and approval but they have transcribed many early church records. http://dwaynemeisner.com/index.php

It is difficult to track down where and when each child was born and where and when they were baptized. It appears they returned to Massachusetts often for the birth of children or for the winter months and baptisms occurred or were recorded when convenient. I will not try to set those records for each child. I will quote Tufts Kinsmen and allow for further research by interested persons or direct descendents. Please post corrections or additions in the comments section of this entire post. A lot of the births and baptisms are available on ancestry.com

2) ELIZABETH TUFTS (1753-1833)
married first 18, Apr. 1771 in Halifax, N. S. to SAMUEL FERGUSON  of Halifax  who died at sea in 1778. had 1) Henry, Jr. FERGUSON
married secondly 22, May 1787 to JACOB ALBRECHT GETCHENS, Capt. St Paul’s church transcripts record Getchens/Getshouse as his last name.
had 2) Elizabeth May GERTZEN   b. 27, Mar. 1789 in Halifax, N. S.
married thirdly;  JOHN PEEBLES, Capt., shipmaster, wid of Mary Robertson
had no issue.
Please forward any information on the further descendents of this family

ELIZABETH TUFTS, Betsey, (1782-1846)
married 2, June 1802 in Halifax, NS. to JOHANN HEINRICK KOHLER
(changed to JOHN HENRY KEELER)
had 11 Keeler children in Dartmouth.
There is more information about these families in Tufts Kinsmen

ABIGAIL TUFTS (1785-1856) in Little Nemaha, Nebr.
married   7, Sep. 1811 in Halifax, N. S. to JAMES PHILLIP PRIESTLY, widower of Susannah Wiswall
I find no record of this family or children. I cannot figure how she died in Nebraska but trust that Herb Adams did.

2) Margaret Elizabeth Tufts (1812-1892)
Married JOHANNES FREDERICK WOLF changed to JOHN FREDERICK WOLFE (1802-1888)
John Frederick Wolf He was possibly of German origin from Lunenburg NS. They had 11 children and passed in Dartmouth (according to ancestry.com family trees). There must be descendents and families there today.

8) BENJAMIN TUFTS, Capt., Ben (1823-1883)
married 19, Nov.  1862 to KATE MATTHEWS
In the mid-1800s Captain BEN and KATE lived near the beach where he had a landing wharf. He is said to have sailed the ﬁrst ﬁshing shallop out of Tufts Cove, Dartmouth which was then a very romantic spot with greenwood trees reaching down to the shore at the Narrows, Often the Micmac Indians, who also lived on the land, could be seen on ﬁne nights gliding up and down Tufts Cove with torchlights spearing ﬁne large lobsters. The Indians were literately blown away in the Halifax Explosion of 1917 and the survivors moved inland to the Shubenacadie reservation
NOTE: A Kate Matthews, b. abt. 1826 in TRURO, N. S. is said to have married a Luther Stearns.  (Kinsmen)

HANNAH TUFTS (1792-1845)
married 23, Sep. 1815 in Halifax, N. S. to RICHARD SEXTON
had  William Henry, George Richard, and James Sexton
There is more about these families available from Tufts Kinsmen