Chapter 2 Children of Gershom Tufts 4 & 5 Suzanna, and Richard
edited 11/12/2014 Information added in red to family of Richard and Jacob (William and Guy).

(Richard Tufts Jr.-continued)
Married secondly to SUSANNAH GODSOE
Had:1) Simon G., 2) Margaret J., 3) Benjamin, 4) David M., 5) Sarah M., 6) Lydia A., 7) Mary E.
1) SIMON TUFTS, (1836-1908)
Capt, master mariner, Simon was one of the best known coasting captains sailing out of Saint John. He followed the sea practically all his life, ﬁrst as a deep sea mariner commanding the brig Union T and also the bark Connaught.  In later years he was in the coasting business sailing for J. M. Driscoll and John E. Moore, as well as on his own. He was a member of the Baptist church and was numbered by many friends. About a month before he died he was institutionalized and because of gangrene had to have one of his legs amputated.(Tufts Kinsmen)
(Simon)
Married first; 23, May  1867 MARY JAMIESON and had: 1) Emma J., 2) Benjamin, 3) Florence A., 4) Clara, 5) Frank, 6)
EMMA JANE TUFTS (1868-1963) 95 years!
Married; 18, Oct.  1897 in Cambridge, Mass. DUGALD JOHN CAMPBELL, fish dealer
had 1) Gladys Elinor CAMPBELL born 4, Sep. 1899 in Cambridge.

GEORGE DAVID TUFTS (1890-1952)
Married first; GERTRUDE GALBRAITH
had no issue.
Married secondly BERTHA BAKER
had no issue. GEORGE was also employed by the CPR in 1905. 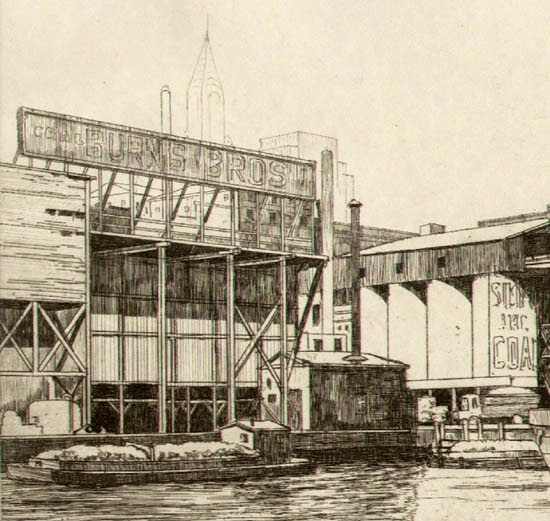 CLARINE TUFTS (Clara?)  (1879-1958)
Married: WILMER STEDMAN BELYEA.
had 1) Arthur  BELYEA
2) Cora     BELYEA
3) Hazel    BELYEA
4) Earle     BELYEA
5) Myrtle  BELYEA
6) Cecil F BELYEA
There are some Belyea trees on ancestry.com with information on this family. There are also many other references available for the Belyea families. Many were Loyalists from New York. A close ancestor of mine through my maternal grandmother was Rachael Belyea (1805 – 1886) who married Alexander Beckett and is probably related.

BESSIE ALBERTA TUFTS (1911-1912)
infant.
Married secondly 31, Oct. 1936 SUSAN (FRIARS) McLEOD, had no issue.
Online records indicate he married Sarah Holly prior to 1911 where he is enumerated in the St John’s census. Online family trees also state he married a Susan Friars secondly with no children.

ROY WILLIAM TUFTS, Roy (1885-1973) Roy was a shoemaker and removed to Vancouver Canada in that employ.
married  MARION E  SIMPSON
had: Ernest and Theodore Tufts
Ernest Simpson Tufts (1915-?) lived in Vancouver at least until 1963 (voter lists) and had a wife. More research needed.

Theodore Crothers Tufts (1916-?) lived in New Westminster BC, Canada and was a public servant (voter lists). More research needed.
I need information on this family

From the research of Bill Tufts:
Jacob married Catherine J. Grant (1816 - February 20, 1848) at the Episcopal Church in Portland Point, (a part of Saint John), on July 27, 1834.  He owned a woodlot of one hundred and fifty four acres inland from Long Beach.  He built a sawmill at Long Beach, near St. Martins, New Brunswick.  The point nearby came to be known as Tufts Point and the lake on his woodlot is named Tufts Lake after him.  He had a long beard and he only smoked once in his life to see what it was like.  His daughter, Martha, smoked a clay pipe and after trying it, Jake couldn’t understand why anyone would smoke.
Jacob “Jake” often supplied the timber for the building of ships by his son, Capt. William, and nephew, Capt. Simon Tufts, as well as other builders.  When people couldn’t pay, he would accept part ownership of these vessels.  He worked hard all his life and even in his 80's, he went off to the woods in winter to cut trees for his mill.  On February 3, 1895, one of his neighbours passed him in the woods with his axe over his shoulder.  He asked Jake why he wasn’t in the woods cutting wood and the answer was: “I’m going home to die”.  He was dead before noon at the age of 87.
Long Beach was a seaport settlement that later was abandoned. The site now is the Fundy Trail which leads to Fundy National park.
WILLIAM ELMORE TUFTS, Capt. (1836-1870)
WILLIAM, it is supposed, drowned in Saint John Harbour and grappling went on for a long time in the vicinity of Merritt’s wharf for several days under the supervision of his cousin, Capt. Benjamin Tufts (420-3). William was captain of the schooner Eva and had left Mr. Shank’s ofﬁce to go on board his vessel which lay under the bow of the bark Lothair at Merritt’s wharf. The watchman of the latter vessel hailed him as he came aboard and he passed to the forecastle deck of the bark and was not seen since. It was supposed that he missed his footing on going over the foreward rail of the Lothair to board his own vessel. The next day Mr. Bridgeo continued in groppling for the body without success. Since the death of his brother Jacob his mind had been in a very depressed state. It was generally believed that he had drowned but his body was never recovered. His share of the schooner was sold and the missing man was morned as one of the dead. However, seven years later news arrived in New Brunswick by some one who had just returned from South American waters that Captain Tufts was alive and well living in Buenos Aires, Argentina under the name “Charlton”
Tufts Kinsmen

WILLIAM ELMORE TUFTS (1870-1935)
married HELENA MAY (McINTYRE) TUFTS (1872-1949)
Previously I believed this was William's Aunt but it is apparently the adopted daughter of his grandfather Jacob from his second wife "Betsy" McIntyre.

married Helena May McIntyre-Tufts (December 25, 1872 - November 13, 1949) on November 21, 1891 at Fairview, St. Martins East. She was the daughter of “Betsy” McIntyre (Jacob’s second wife-below) but went by the name Tufts.  School records show her as Helena May Tufts age 4 in 1876 in Long Beach.
Will and Helena had 10 children: Muriel, Guy, Les, Alvic, Bessie, Edward, Dora, Myrtle, Helen, and Lyle.
William (1870) and Helena were living in Fredericton but when Jacob Tufts died in 1895, they moved back to Long Beach presumably with children Muriel and Guy to care for Helena’s mother Betsey.  In 1898, Will moved his family to Fairfield and they were the last family to move away from Long Beach.  Betsy moved to Greer Settlement, St. Martins East, and lived in the ‘Greer House’. She died in 1906.
In 1911, “Will” went to Fredericton for his mother’s (Sarah Ann DeLong) funeral and met up with his step-father, Abner Gordon Clarke.
Will and Abner traded farms and in 1912, Will moved his family to New Maryland, (outside Fredericton) and Abner moved his family to Fairfield. 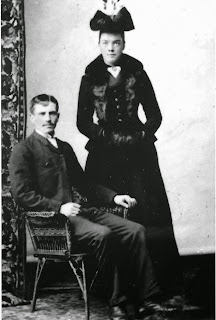 Guy Elmore Tufts, was born in Fredericton, New Brunswick, on 5 May, 1895, and as a child lived in Fredericton (Devon), Long Beach, Fairfield, and New Maryland.
In 1915, at the age of twenty years, Guy went to Sussex, N.B., and enlisted on November 24th in the New Brunswick Battalion of the "CEF" (Canadian Expeditionary Force).  During this time, a series of illnesses prevailed.  As his Company pulled away from Canadian soil, Guy lay in a hospital bed fighting for his life against pneumonia. He did join the forces during WW1 in England.
Guy married Elizabeth Ellen “Lizzie” Gorman (June 19, 1896 - December 12, 1980) on August 13, 1919 in Fredericton.  She was the daughter of William Gorman and Mary May Jones.  After the war, Guy worked as a maintenance man for the RCMP and worked for the Post Office. While working for the RCMP Guy had the opportunity to acquire a round oak table and 4 arm chairs. These were in the St. Martins house on Beach St. and are still held by the family today. 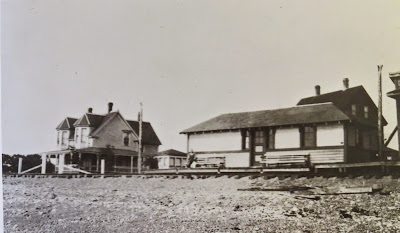 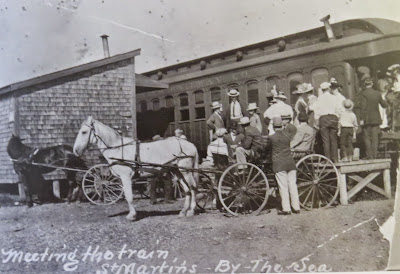 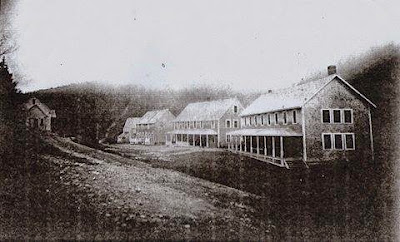 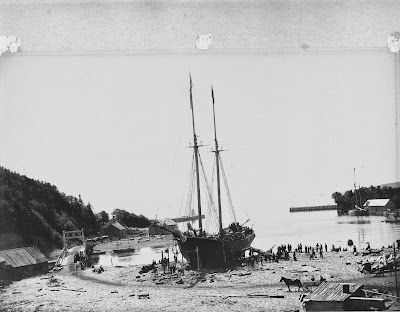 5)WILLIAM TUFTS (1810-?)
William was a ship carpenter in New York and is known to have married twice but both wives had died before 1901. In 1848 he settled his family somewhere up the Mississippi River from New Orleans, La. It is said that William drowned. Tufts Kinsmen
married LENA WALKER
had: CHARLES TUFTS ?
6) MARY TUFTS (1811-1909)
married WILLIAM C FRAZER
had 1) Sarah Ann 2) John 3) William Henry 4) David Hiltz 5) Emma Jane 6) Elizabeth FRAZER

(Simon Tufts-continued)
Married secondly;  LYDIA AUGUSTA (MAHER) NESBITT
Had:
MARGARET MAY TUFTS (1871-1951)
married FREDERICK AUGUSTUS CHURCHILL
had 12 children in Massachusetts
(Richard Tufts Sr.-continued)
9) MARTHA TUFTS (1822-1907)
married GEORGE KERR or CARR
had 1) Georgianna KERR Family.
Married secondly  WILLIAM McDONOUGH of Ireland
had 8 children in NB. MARTHA is remembered as smoking a clay pipe. Her father tried it and wondered how she could stand the smoke It is claimed that George Kerr vanished on Christmas Eve crossing Reversing Falls Bridge, having gone out to buy the Christmas turkey and never returned home
Posted by Thomas W Tufts at 8:11 PM