My search for the Henry Tufts graveyard

I have been researching the Tufts family since 2011 and have always liked to focus on local Tufts families in New Hampshire. One such story is about the infamous horse thief, Henry Tufts. In 1806, he wrote a book about his life in which he tells about a life of crime in the colonial era. I like to share the stories of the good Tufts, but history must be told, and this family left some loose ends in the records.

Henry Tufts Sr. settled in Lee, New Hampshire around 1740. He had a farm on the Durham line with pastures on both sides of Lee Hook Road. His family was from Medford, Massachusetts, where most of our Tufts clan originates. Henry Sr. was a reputable tailor, farmer, and soldier. He and his wife, Mary, died in Lee and are likely buried on the farm.

Henry and Mary had children: Henry, Thomas, Eliphalet, and possibly Molly, Jonathan, and John. Molly and Jonathan are said to have died young, and John is recorded as settling in Bedford, New Hampshire but I have seen records that this John Tufts was from Massachusetts. Eliphalet was a Revolutionary soldier, passing in 1807, and well recorded in Lee. Thomas Tufts raised his family on the farm in Lee as well. Thomas and his wife Hannah (Davis) are known to have died on the farm and are likely buried there. It is remarkable to note that her obituary states she had 14 children while the family records only list six. Unfortunately, I lost the label with her obituary, but I believe it was 1837. If they lost numerous children young, it is possible they were also buried there on the farm. I exhausted the usual sources and found no record of their burials elsewhere.

There is an old graveyard on the farm, on the edge of the sheep pasture by a stone wall. I visited there years ago and found only McDaniel family stones. Recently I discovered that Durham considers the graveyard in Durham, not Lee. Their records list the McDaniel family buried there who lived on the farm after the Tufts.

Now in this spring of our re-emerging, I helped a local group clean up the old cemetery. Save Our Stones (SOS) is a volunteer group in Durham taking on the monumental task of finding and cleaning as many old graveyards in Durham they can. Please help them if you can.

We met in May and armed with a few hand tools and some bug spray, we set out into the sheep pasture and wood edge. The brush and vines were all removed quickly with many hands to help. The McDaniel stones were cleaned and today another was discovered beneath the topsoil. It will be added to the records. They plan to return and stand the stone up. 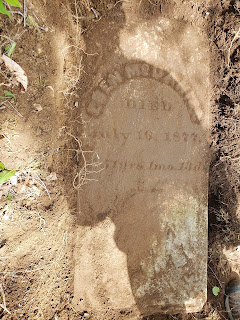 In the opposite half of the graveyard was a section with six field stones. All of them were broken off at about ground level and none had any legible markings. At least two of them had something that could be letters, but we could not make them out. Around the fieldstones were several flat stones barely covered with topsoil which did not seem to be parts of head stones but clearly placed around or on top of the grave. I noted it odd that they would fill in over a grave with any large rocks. They were not the shape of a head or foot stone; some could have been placed to hold up the head stone. Like many New England farms, rocks are plentiful. The rock walls near the cemetery have many flat fieldstones but none appeared to be broken pieces of the standing stones. 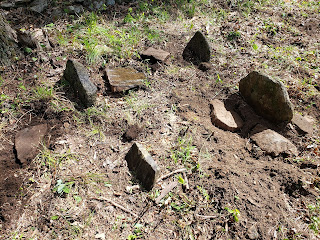 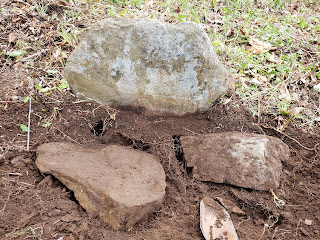 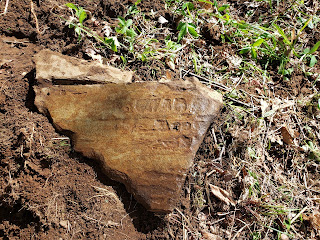 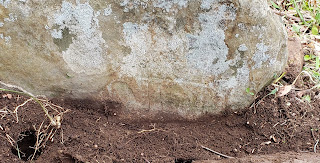 We may never know who is buried in these graves but will not stop looking for records. It is my opinion that they are likely the six Tufts I have record of dying there from 1780-1837. It is also possible the stones mark the graves of earlier residents prior to the Tufts ownership around 1740. Deeds are being researched in Strafford county for these questions as well as the earliest records of the graveyard. There was however, one additional record.

“(in the) field front of the McDaniel house is the Tufts family burying ground in which Thomas and his wife are buried. There is a slate headstone still standing marked T. W. T.”

This handwritten description is hard to figure, so we were looking everywhere. It was found inside a book in the Dover library and the author’s name is illegible. There appears to be a graveyard on the opposite side of Lee Hook Road about a quarter mile east with no upright stones. One report of this graveyard said the graves were removed and it is now used by the owners as a pet cemetery. The trees inside the stone walls are large and big enough that the power company or town has cut some off the roadway. It has stones littering the ground, but none appear to be headstones. More research is needed on that one, but the surprise still awaited us. 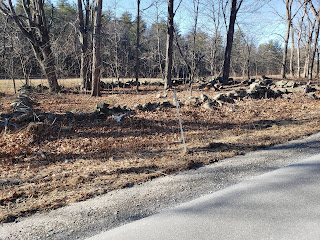 We inquired with the current landowner adjacent to this graveyard, who was running a small farm on that side of the road. That farmer did indeed know of a stone marked “T T”. (It appears to have a small x not a W). It was leaning right on the front of the barn, in the dooryard where we were talking! It is a large stone. It is about 3 feet wide by four feet tall with the initials low on the face. He stated they found it on the ground after a logging project several years ago. The farmer said there was no evidence of a graveyard and that area was a pasture for at least the last fifty years. We looked around for the graveyard in the area he indicated and saw no indication of it. It was very overgrown with low brush and I intend to look again. 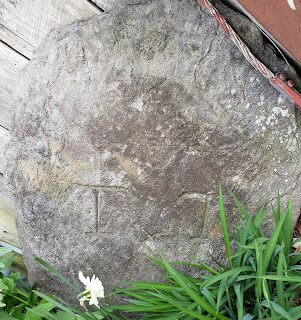 We may never know if this stone marked the grave of Thomas Tufts or where it originated. At some point, it should be returned to its original place or as close to that as we can determine is proper. In Part 2 of this story, I will detail the facts surrounding the property and graveyards. In the meantime, please get out and help the local groups or families clean up and restore these old, neglected graveyards. You never know, you may discover a headstone with your initials.