When I am on vacation in Maine, I often do a little research. I love to find an old cemetery and seek out the Tufts who might be buried there. In 2019, in Damariscotta, I discovered the graves of three Tufts children in a beautifully preserved old farm setting. 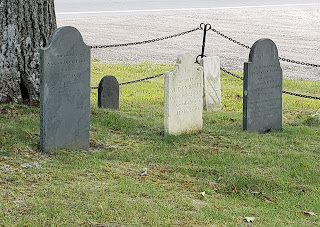 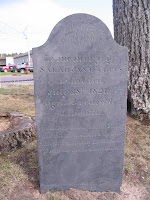 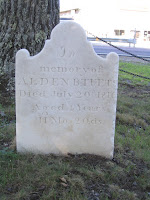 The website findagrave lists four Tufts family members in the Flint-Tufts Cemetery, right along Route 1 in Damariscotta. The fourth is listed as the father, Francis Tufts (unknown -1835).(Even though the epitaph refers to an "infant form".) The source comes from the information on the stones and the fourth stone is not clear enough to draw that conclusion, so research is being done to see if there is another source for the burials.  The Town of Damariscotta lists the cemetery on their website and has a map. They are progressing on documenting the stones and persons buried there. Any information on these families is appreciated. 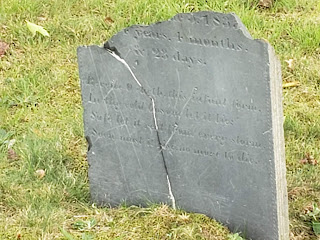 Tufts Kinsmen listed four young children of this family. The book does not list a source and only lists the fourth child as the initials S and H (1806-1843). These children were the progeny of Francis (Frank) Tufts and Esther (Stover) Tufts of Damariscotta, Maine. Frank was the son of Moses Tufts from Lynn, Massachusetts who was an officer in the Revolutionary war, a schoolteacher and settled across the river from Damariscotta in Newcastle, Maine after the war. The story of Moses leaving Lynn, Massachusetts and settling in Newcastle is remarkable, as it was an early settlement before 1790 (when he was in census there).

Moses Tufts (1744-1805) married Phebe Thompson (1743-1805) and had: Phebe, Rhoda, Moses, Rhoda, Katherine, Francis. (Both Rhodas died as infants.) Phebe married David Dodge in Newcastle and had a large family. Moses married Thankful Marks in Connecticut (possibly), Katherine married Abraham Dodge, then Samuel Little, and had 7 children in Maine. (from Tufts Kinsmen)
Francis (Frank), the father of the children buried in this little cemetery, was born in 1778 in Lynn, Massachusetts. It appears Frank married Esther Stover.  (Kinsmen has the notation “w?” for widow, but I have not seen any record indicating so.) No other record of this family has been found. Kinsmen also states Frank died in 1849 in Richmond County, Staten Island, NY with no reference to the record. Frank is listed as Captain. No record of military service has been found and it is likely he was a ship’s Captain as Damariscotta is an ocean community. (The death record in New York may be Sailor’s Snug Harbor, a retirement home for sailors there.) His birth record appears to be 1778 not 1779. Lynn vital records online show it as 1778. His family number in Kinsmen is 94-6. It is possible there is more information in the archives of Kinsmen author Herbert Adams at Tufts University Digital Collections Archives, Tufts Kinsmen Association collection.

A beautiful barn sits near the site of the cemetery today. The cemetery is quite close to the road, but the farm sits back and has trails and events at the barn. The farm is part of the Coastal Rivers Conservation Trust. 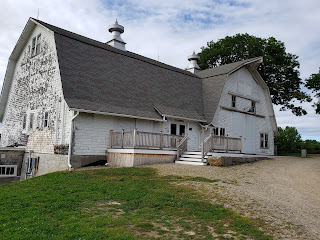 I especially like the epitaphs on these old stones despite the sadness. Photo credit Damariscotta Cemetery Trustees.

Dear God let all my hours be thine / Whilst I enjoy the light. / Then shall my sun in smiles decline / And bring a pleasant night.

Unveiling thy bosom faithful Tomb /Take this new treasure to thy trust /And give this lovely Infant room / To slumber in the silent dust. 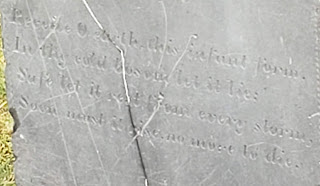 Receive O earth, this infant form/ In thy cold bosom let it lie/ safe let it rest from every storm/Soon must it rise, no more to die.
It would be nice to put at least a name to this poor soul. Research continues.