Richard Holland Tufts was a Halifax Harbour Commission Police Officer who died while on duty in 1935. He is not recognized on any memorial there but we hope to change that some day. He had seen much tragedy in his life, losing his entire family in the harbor explosion of 1917.He survived the explosion and went on to remarry and have a family, serving his community as a Peace Officer and soldier.

UPDATE OCTOBER 2018: Richard's name has been added to the Nova Scotia Peace Officers Monument in Halifax and he will be recognized in the annual ceremony October 21, 2018 by the  Nova Scotia Chiefs of Police Association 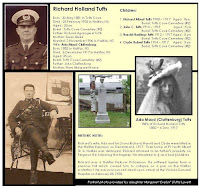 Born in 1881, his middle name was respectful of his grandmother Ophelia (Holland) Tufts. Richard H was the son of Richard Agozagwell Tufts and Susan Blake. He descended from Peter Tufts, our common immigrant through Jonathan, James, James, and Gershom who came to Dartmouth, Nova Scotia around 1749. Richard’s line from Gershom was James B. Tufts, Charles H. Tufts, and Richard Agozagwell Tufts. They were descended from Dartmouth families but in the 1901 census Richard is living with his parents in Halifax and working as a moulder. His father worked for many years for the Canadian National Railroad. In 1911 He is still in Halifax and married with children, working as a laborer. He married Ada Maud (Clattenburg) in  and had Richard Albert Tufts, John C. Tufts, Harold Hastings Tufts and Clyde Robert Tufts. John C. died at just four years of age on December 26, 1914. Ada and the other boys were killed when their home was destroyed in the harbor explosion. They were living at 91 North Albert Street in Halifax’s Richmond neighborhood at the time which was heavily impacted by the explosion. It is presumed Richard must have been at work at the time of the explosion or on military service. The survivors list from the explosion lists his CPASC barracks for his contact information. He is credited with military service in and around Halifax. In his “Attestation Paper” of 1918 he states he is currently a member of the service and had been attached to the 63rd Regiment (3 years), AMC (9years), and CPASC (4 years, 5 days). The 63rd Regiment was the “Halifax Rifles”. They were placed on active service on 6 August 1914 for local protective duty in Halifax. AMC would have been the Canadian Army Medical Corps, and CPASC was the Canadian Permanent Army Service Corps. 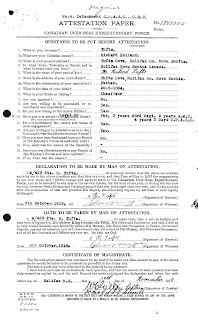 In 1918 he lists chauffeur as his occupation in the period census. It must have been a terrible loss for him, but he moved on with his life, married again and had another family. His family information can be found in Chapter 4 about half way down under the children of Richard Agozagwell Tufts and entered in red. I have a little more on the family and contact with descendants if any one is looking for more. It is easy to find information about the harbor explosion tragedy. The City of Boston’s help brings them a Christmas tree every year for their aid. You can watch it’s progress on social media. http://novascotia.ca/treeforboston/

Richard, Ada, and the children are buried at Tufts Cove cemetery. Gary Wright of Nova Scotia has been restoring the old graveyard and has provided a lot of information for this story. Great thanks are due to him for his hard work on the cemetery which was left to become over run. He has a facebook page and would appreciate any donations or help to the cause.  https://www.facebook.com/groups/575419135873934/
The cemetery is also on findagrave.com along with many other Tufts and other families descended from Tufts such as Gay, Wright, etc: http://www.findagrave.com/cgi-bin/fg.cgi?page=gr&GSsr=41&GScid=2351187&GRid=53187137&

As always, please forward any corrections or additions to this story and please comment as appropriate so others can enjoy additional information.
Posted by Thomas W Tufts at 7:24 PM