This post is lengthy as there were many large families. I have some additional information on selected families, but will share them on request. I will continue to add to these posts as information is gathered. Please forward any information especially on the daughters families.
Edited January 2017 Corrections and additions have been made in the family of Gershom Tufts' son William.

LUCY ABIGAIL TUFTS (1829-1889)
married JOSEPH WASHINGTON AKENS (or Akers?), Civil War Veteran, (1831-1905)
had 10 Akers children in Granby MA
There are family trees on Ancestry.com with details on this family.

MAGGIE A.  TUFTS (1862-?)
Married CLARENCE R. KELLY
I need information on this family

3) SUSAN TUFTS (1802-1847)
Married WILLIAM JAMES CRAIG, ﬁrst mailman in Halifax, (1789-1874) from Glasgow, Scotland
had at least 9 Craig children, and appear to have left a large legacy according to trees available on ancestry.com. 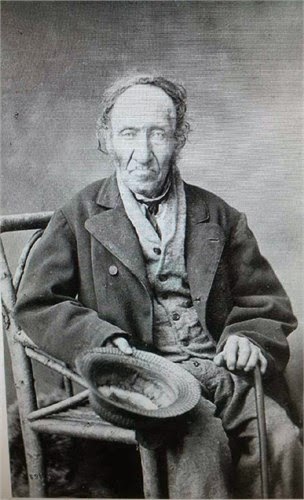 'Jock' (William) Craig, who for 54 years was the letter carrier of the General Post Office, Halifax, N.S. Photo taken 1 Aug. 1871, when 81 years old William Craig (ca. 1790-1874) was a noted Halifax character who wrote under the signature "Will the Ranter of Craig Lee". His publications include Rich Men: A Lecture by Will the Ranter, at the New Market Hall, Oct. 9, 1863 (1863) and Verses (Halifax, 1869). Craig's rhyme,"The Champion of Nova Scotia", which appeared in Verses, criticized Joseph Howe's political switch from Anti-Confederate M.P. to Conservative cabinet minister: "What has come o'er our champion Joe/ That he has been converted so/ Why should he go and join the foe.../ Go with the traitors one and a';/ You've sold yourself to Ottawa...."
This story was available at the Nova Scotia Archives site.
http://novascotia.ca/archives/

7) CHARLES TUFTS, wharf builder, (1811-1867)
Married OPHELIA HOLLAND (1823-1875)
had 1) Charles H., 2) Elizabeth B., 3) Richard A., 4) Ada
CHARLES HASTINGS TUFTS, Hastings(1843-1913)
Married MARY (PHELAN) DELANEY, widow of Edward Delaney
had 1) Charles H., 2) Frederick R.
CHARLES HASTINGS TUFTS, Jr. (1885-1931)
Married MARY ANNE OULEHAN (1885-1960)
had 1) Mary M. 2) Theresa A., 3) Anna J. Tufts
I need information on this family
FREDERICK RICHARD TUFTS (1888-1939)
Married to HATTIE ?
had A) Daniel TUFTS
DANIEL TUFTS,
married EDITH COMEAU, author, historian, community had 15 children(?)
A member of the Royal Canadian Army Medical Corps in World War Two, he returned home with health problems of his own.  After marrying the couple moved to Saulnierville for the good clean air and restful lifestyle.
Mrs. Tufts, very much an Acadian, was newly graduated from Maritime Business College in Halifax, and had started her career during the war working at Zellers store on Barrington Street when she was called upon to translate the needs for the crews of Free French submarines put into Halifax Harbour in the first days of World War Two who were shopping for souvenirs.  Her bilingualism has served her well ever since.  Her first book was written in 1975 to fill a void in Acadian history on women’s contributions.  In 1979 her book on the Acadian child sold 15,000 copies.  Most of her writings have been in French but many of her speaking engagements are in English.  She had published books of poems and a Christmas story, as well as books on cooking and household hints.  In recognition of her work she was invested as a member of the Order of Canada––the first Acadian, and was awarded the Queen’s Jubilee Medal in 1977.  She also holds the coveted medal of the Associated Council of French Life in America. [PWM Aug. 17, 1990 in THMS]
Tufts Kinsmen
I need information on this family 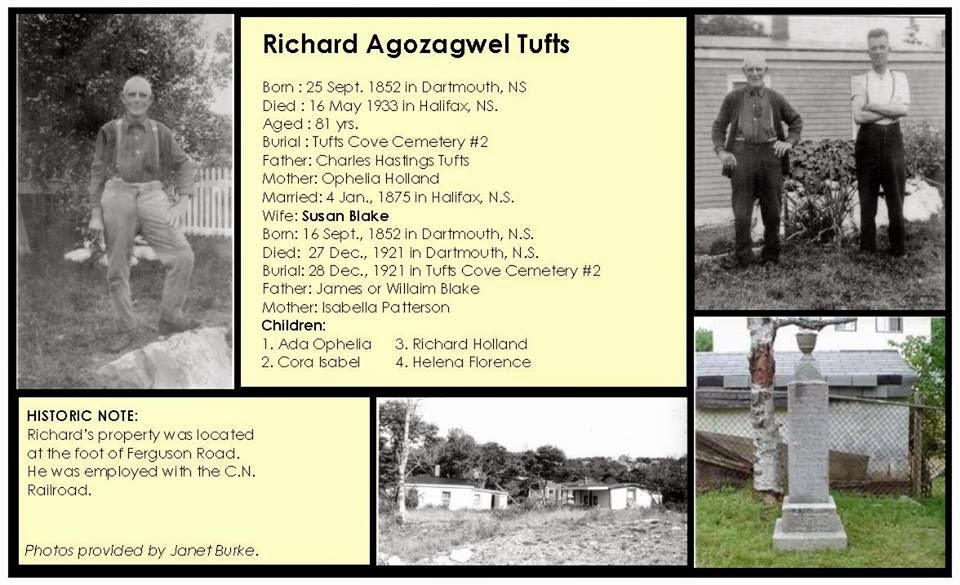 Cemetery card for Richard A Tufts with some differences in spelling.
These cards are posted on the Tufts Cove Cemetery facebook page.
Gary Wright has done a wonderful job restoring this resting place of so many of these families. and deserves many thanks and any support we can give him.
https://www.facebook.com/groups/575419135873934/
RICHARD AGOZAGWEL TUFTS, yeoman, (1852-1933)
Married SUSAN BLAKE (1852-1921)
had 1) Ada O., 2) Cora I., 3) Richard H., 4) Lena F.
ADA OPHELIA TUFTS (1875-?)
Married ALBERT HENRY NEW,
Had ?
Married secondly LESLIE ALLEN,
Had ?

RICHARD L TUFTS married JANET RACHEL ANDREWS
Had:
1) Richard Curtis Tufts (1954)
2) Stephen or Steven,
3) Doris died young in a tragic accident.
Denise?
Peter?
Richard L remarried to Lorna (?) and had another son Richard (?)
I am looking for information on these families and to connect any cousins that might have lost contact.
LEO KENNETH TUFTS married SHIRLEY DUPRES
had
1) Michael David (1955) married Marie Ripley
2) Gregory Bruce (1956)
3) Kenneth Patrick (1960)
4) Helen Margaret (1965)
Some of these descendants are alive and well in the area today. Thanks to Mike and Helen for this information

SUSAN TUFTS, or Susanna (1855-1904)
Married JAMES WILLIAM WOURNELL, (1848-1933).
He later married Sarah Rebecca (Gray) Tufts (above)
Susan and James had 11 Wournell children who were raised with the Tufts above.

CHARLOTTE LAURA TUFTS (1856-1932)
Married GEORGE HENRY CRAIG,  (1853-1923), son of George Edward and Mary Ann (Hampton) Craig. George was a son of William J Craig and Susan Tufts from James B. and Gershom (above).
Had 9 Craig children and removed to Massachusetts.

AMELIA TUFTS (no other information)

I am working with some researchers trying to straighten out this mystery of Charles Berkely. If you have any information, please contact me by e-mail

William Campbell Loner
1880 – 1959
I hope to add more to this family, please contact me for cousin connections

MARGARET TUFTS
Margaret was previously believed to be the last child of Gershom but later determined to be a servant of his son Francis.
Married RICHARD MOONEY

Thus ends the family of Gershom Tufts. The following chapter will relate the families of Reverend Joshua Tufts.
Posted by Thomas W Tufts at 9:00 PM