Scots-Irish; early settlers at Concord and the “Irish Fort”

This is the third Guest Blog that I did for Nutfield Genealogy Blog
http://nutfieldgenealogy.blogspot.com/2012/08/scots-irish-at-concord-nh-and-irish-fort.html 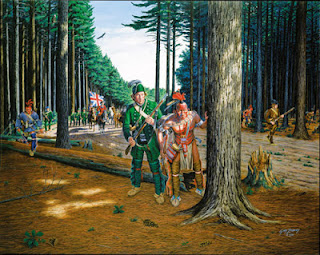 
The Scots-Irish went many places after landing in Nutfield. They were considered squatters at Concord and built what may have been the first fort in the interior of New Hampshire. Previous forts were in place at the Seacoast to protect from foreign invasions and every community had garrison houses built for defense, but theirs seems to be the first called a fort.  The only fort before this was built for an injured soldier on the way to Lovewell’s fight in Pigwacket (Fryeburg Maine) in 1725 and was merely a “palisaded log cabin”. (This is quoted from one of the best books on the conflict; A Half-Century of Conflict by Francis Parkman. The injured soldier of Lovewell’s was Benjamin Kidder of Nutfield.) The Fort at #4 in Charlestown NH was built later.


We know the Scots-Irish were in Nutfield as early as 1719 and apparently some moved on to Concord by 1721-1722. This is mentioned in The military history of the state of New-Hampshire, from its settlement, in 1623, to the rebellion, in 1861: comprising an account of the stirring events connected therewith; biographical notices of many of the officers distinguished therein: and notes explanatory of the text by C. E. Potter. That reference states in the same chapter that the fort at Penacook (Concord) was there in 1722 when Massachusetts sent soldiers there to take command of it and drive off the Irish. How successful they were is open to debate and further research. They could be the families that settled in Dunbarton and surrounding towns like Bow. The History of Concord…by The Historic Commission and Lyford states that surveyors in 1722 found the Irish there and reported it to the authorities, claiming they had a grant from New Hampshire to make a settlement there. The Massachusetts government thought enough of this report to send a troop there to investigate. They did indeed find the Scots-Irish settled there and in the discussion of who had the power to hold or grant the land, the Scots-Irish spokesman, (a Mr. Houston) told Lt. Frie(or Frye) and his troop to remove themselves or they would drive them off. No one was removed and the Lieutenant sent back to Massachusetts for advice but it appears they stayed and surveyed the settlement on the west side of the river and the Irish maintained their homes in what is now East Concord. By 1724 they had erected a fort within 80 rods of Sewall’s farm “upon the interval on the east side of the river with a view to permanent occupation”. This was the “Irish Fort” and in 1725 the Indian hunter, Col. Tyng rested there on his way to scout for Indians in the Winnipesauke area. Since then this area has been know as the fort and encompasses East Concord which is near to New Hampshire’s current “Fort”, the National Guard base.


It seems though, that the Irish settlers were to be caught up in the fight between Massachusetts and New Hampshire for the rights to settle the land. They had long fought over the boundary between the two states and this was miles to the north but they both claimed it as their own. Even to the point where each sent surveyors to lay out the land and enticed settlers with money to settle there. Each state also granted lands and lots and in 1725, families from Andover, Haverhill and other Essex County towns started to settle on the west side of the river. Nothing more is said of the Irish in that publication. In Bouton’s History of Concord the Irish of Nutfield are mentioned as having a fort there prior to the grant by Massachusetts. One of the petitions even states that “as in the case of Nutfield, it would be a thing attended with too much difficulty to pretend to root them out, if they should get a foothold there”. 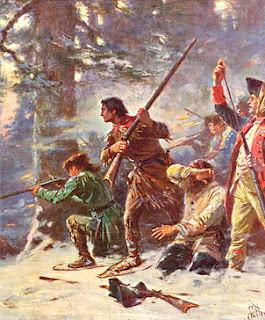 The Indian danger was present from the first settlements right up until the Revolutionary period. Some historians have called this Americas bloodiest conflict as it was deadlier per capita compared to the Civil War or the World Wars. At times referred to as the French and Indian wars, they can be defined by monarch and time period and relation to the European conflict they accompanied. No matter what you call it the period from first settlement to late Eighteenth Century was a warring time. Each village had to muster and drill and numerous lists of these soldiers are available. The Scots-Irish were not unaccustomed to this as they had endured the same fate before coming to America. Their history there is full of war stories. A full chapter of History of Londonderry is devoted to their turbulent times in the British Isles. Their names are scattered throughout the early rosters of Militia. It is no surprise that on settling at “Penacook” they built a fort for protection from the savages. Robert Rogers the famous Indian hunter and first leader of “Rangers” in the military was said to be Scots-Irish but there was debate over whether he was from Londonderry or Massachusetts.


Next time….more on the Scots in the local militias and offensive attacks on Louisburg Nova Scotia and Canada.


The histories mentioned in this article are:


History of Concord, New Hampshire: From the Original Grant in Seventeen Hundred and Twenty-five to the Opening of the Twentieth Century, by Concord (N.H.). City History Commission, Amos Hadley, Will B. Howe


The History of Concord: From Its First Grant in 1725, to the Organization of the City Government in 1853, with a History of the Ancient Penacooks ; the Whole Interspersed with Numerous Interesting Incidents and Anecdotes, Down to the Present Period, 1885 ; Embellished with Maps ; with Portraits of Distinguished Citizens, and Views of Ancient and Modern Residences by Nathaniel Bouton


The History of Londonderry, Comprising the Towns of Derry and Londonderry, N. H. by Edward Lutwyche Parker
Posted by Thomas W Tufts at 5:36 PM