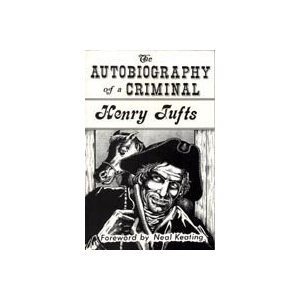 I hope my Great-Grandfather forgives me. James Arthur Tufts I was a professor of English at Phillips Exeter Academy for 50 years and on local library boards to prevent Henry Tufts book from being bought for the public to read. Henry was not an ancestor of mine and his book is what I call barely historical fiction. It tells the tale of his life of criminal activities and “sufferings”. Titled; A Narrative of the Life, Adventures, Travels and Sufferings of Henry Tufts, Now Residing at Lemington, in the District of Maine, in Substance, as Compiled from His Own Mouth. The printing shop that originally printed it was burned down because they printed it but later it was edited and released by Edmund Lester Pearson in 1930 and in 1993 with an extensive introduction by Neal Keating.  It is available occasionally today from online sources. Some stated it was really written with Thomas Tash, a revolutionary hero and neighbor of Henry’s in Lee, NH. The book is now available as the second complete edition. Daniel Allie has transcribed the original book from a library copy and published it in 2017. It is available at Amazon or at his website henrytufts,com and his guest story


The story contains narrative of his first exploits stealing fruit from a neighbor’s orchard as a child and continues stealing whenever he needed throughout his life. He seemed proud of it, stole from his own family and found fault with those who would not lock things up. He fathered children with several women, even marrying them without leaving his previous wife. He joined the army and deserted when he got bored. At times this caught up with him and he was jailed but he prided himself with his ability to escape jails including Exeter, Dover, Berwick, Maine and in Massachusetts. He even was committed to death for offenses in Massachusetts and only was reprieved at the last moment and sent to the Castle prison in Boston. He later was moved to Salem where he escaped the last time fleeing to Maine where his wife and their children had established homes. He had spent time living with the Abenaki Indians to recover from an illness and learned the Indian method of medicine from Molly Ockett which he later performed for many others, perhaps making up for his many disgraces.


That is the short version. It barely details the full story. A quick internet search will bring up results for many books and articles where the book is mentioned. It is not bad if you look at it as entertainment or for a look into what life was like in the colonial era. The book Landmarks in Ancient Dover, New Hampshire by Mary Thompson describes him in her description of the Lee/Durham boundary line which ran through their farm. Notable Events in the History of Dover New Hampshire From the First Settlement in 1623 to 1865 by George Wadleigh is another. The full review of his book which I prefer appears in Harper's new monthly magazine Volume 76, Issues 451-456. This review by Thomas Wentworth Higginson really describes it better than I could. He details many of his exploits stealing horses and traveling the continent. Dennis Robinson of seacoastnh.com recently reviewed the book with no reference to respectable Tufts. Another recent blog can be seen here


I would rather tell the story of the proud Tufts family that is filled with leaders in many fields. They were teachers, preachers, soldiers, and farmers, and all respectable members of society. Many Tufts continue to be leaders in society and serve their country proudly. Henry's book itself describes his family as Boston “Brahmin”. Most of us can trace our roots to Henry’s 2nd Great Grandfather; Peter Tufts, who came to Charlestown, Massachusetts from Norfolk County England around 1638. Henry’s grandfather was a respected Harvard educated preacher and his Uncle: Lieutenant Thomas Tufts of Greenland, New Hampshire was a teacher and Adjutant in the Colonial Militia in the siege of Louisburg, Nova Scotia in 1745 and died from illness acquired there. Colonel Henry Tufts (no direct relation) in the 1970's was the first head of the US Army Criminal Investigation Division. Descendants of Henry's family and his father’s family were early settlers of the Farmington, NH area and Limington, ME. There are many patriots and civic leaders in the families even today. . The best reference for this family is Tufts Kinsmen by Herbert Adams and the Tufts Kinsmen Association (2010 and earlier editions). It can be obtained by sending an e-mail to: tuftskinsmenbook@gmail.com


A Narrative of the Life, Adventures, Travels and Sufferings of Henry Tufts, now residing at Lemington, in the District of Maine, by Henry Tufts, printed by Samuel Bragg, 1807 (the original book can be seen at the Essex Institute, Salem, Massachusetts and at the New York Public Library) 1993 reprint available.
Genealogy:


Generation 4) Henry Tufts was born 24 June 1748 in Newmarket, New Hamphsire, and died 31 January 1831 in Limerick, Maine. He was married about 1770 in Durham, New Hampshire to Lydia Bickford, daughter of Joseph Bickford and Margery Unknown. In the Tufts Kinsmen he is listed as "vagabond, soldier AR, Indian doctor".
My same guest blog at Nutfield Genealogy: http://nutfieldgenealogy.blogspot.com/2012/09/henry-tufts-black-sheep-of-otherwise.html