I am working on a full story about old pictures and records but this is a priority as someone is looking to return an old photograph to any descendants of the subject. Please read through and help out if you can.

We are looking to return a family photograph to any descendants. The photo is of Dwight Tufts, born in 1851 probably in Massachusetts. His parents were Albert Smith Tufts and Elizabeth (Chase) Bartlett (Betsey, widow of Ebenezer Bartlett). 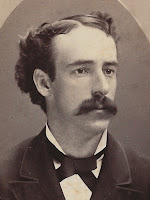 Records of Dwight are difficult to decipher. We do know this family came from the family of Gershom Tufts who went to Dartmouth, Nova Scotia in 1760 and left a large legacy. The story of Gershom’s descendants are told in Chapter 4 of Nova Scotia Tufts families. Gershom was a fifth-generation descendant of Peter Tufts of Charlestown, Massachusetts, the Tufts immigrant ancestor. Some of Gershom’s descendants returned to America.  The subject of the photo’s grandfather Benjamin was the one who returned in his line. He was a soldier in the war of 1812 from Springfield, Massachusetts and had 10 children in Fishkill, NY and Hadley, MA.His male line:
Gershom Tufts
James B Tufts
Benjamin S Tufts
Albert S Tufts
Dwight Tufts 1851-?

Albert and his wife Betsey are listed as having only 1 child in the records I could find. He is listed as Dwight F Tufts at birth and in the first 2 census records. In his later marriage records he is recorded as Charles Dexter Tufts. I have yet to find the answer to that mystery. I did not see any records of children from Charles marriage so it may be unlikely there are any descendants. There would be cousins though. Dwight (or Charles) had 2 half-brothers; Albert D Tufts and Henry N Tufts. Albert S Tufts was also had 9 siblings so the Tufts family of Hamden and Hampshire counties in Massachusetts could enjoy this picture of their old uncle.

There is also a picture on ebay for sale right now (February 2020). It is three women of the Barri family, one named Tufts. ebay link
It would be nice to return these to some family members. It is possible there are none but there could be cousin, nieces and nephews. Please contact ttuftsy@comcast.net if you have any information on the descendants of these families.
Posted by Thomas W Tufts at 5:01 AM No comments: